Price winner of the 17th edition of the International Robert Schumann Competition for pianists 2016.

Pianist Cheng Zhang first received international recogni-tion in 2011 by winning both the only Haskil prize and public prize at the prestigious Clara Haskil International Piano Competition in Vevey Switzerland.A native of China, he garnered critical acclaim for his per-formances at such venues including Konzerthaus in Berlin, Gewandhaus in Leipzig, Théâtre des Champs-Élysées in Paris, Stravinski Auditorium in Montreux and Philharmonic in Warsaw. Highlights in recent years include appearances at Klavier-Festival Ruhr, Verbier Festival Academy, Festival Septembre Musical de Montreux-Vevey, Schubertiade from Espace 2, Bonn Robert Schumannfest and Nohant Chopin Festival.Since 2016, after winning the 17th edition of the International Robert Schumann Piano Competition in Zwickau Germany, Cheng has established himself as a distinguished Schumann interpreter of his generation in the recent concert seasons. His all-Schumann album, recorded live at Église Saint-Marcellin de Névache in France, was released in June 2019 by Accentus music. Cheng studied with Klaus Hellwig at the Universität der Künste Berlin in Germany, where he now lives. He also holds a degree from TCU School of Music under the guid-ance of Tamás Ungár. Before moving to the United States, he attended the Shenzhen Arts School in China, where he was a pupil of Dan Zhaoyi.“,

CD-Recordings of works by Schumann:

„Zhang Cheng attended Shenzhen Conservatory, Texas Christian University and the Universität der Künste in Berlin and took first prize at the 2011 Clara Haskil Competition in Vevey. His Schumann programme is a model of preternatural clarity, though he can be relentless in some of the composer’s more obsessive rhythmic patterns. If the First Sonata is strikingly uneven, his Humoreske is deeply persuasive.“, cf. https://www.gramophone.co.uk/ 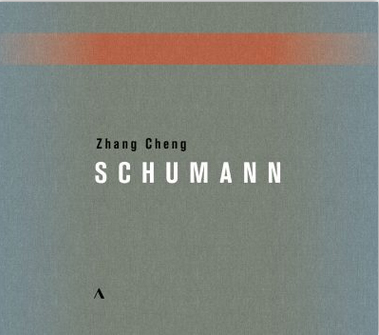 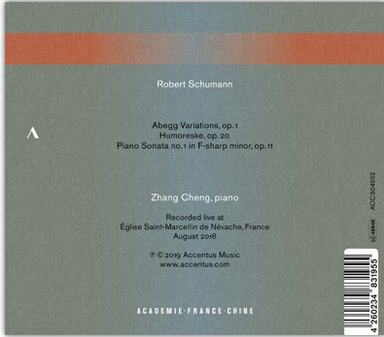