“Luisa Imorde enchants the audience”, a critic wrote about the 26-year-old German pianist, because her piano playing “is by no means routine but love to which she musically devotes herself”.

Born to a family of musicians, Luisa Imorde received her first piano lessons from her mother at the age of three already. In 2012, after first being taught as a junior student by Professor Andreas Frölich at the University of Music of Cologne, she continued her studies with Professor Jacques Rouvier at the Mozarteum University of Music of Salzburg.

Along with several first prizes at “Jugend Musiziert [Youth Makes Music]” and national awards, such as the “Klassikpreis [Classical Music Prize]” of the WDR [West German Broadcasting], Luisa Imorde is also an award winner of numerous international piano competitions. With Mozart’s Piano Concerto KV 488 and being the youngest participant, she won the Second Prize of International Piano Competition “José Roca” at the “Palau de la Música [Palace of Music]” in Valencia.

Since 2012, Luisa Imorde has been a scholar of the Studienstiftung des Deutschen Volkes [German National Academic Foundation]. She is being similarly promoted by Theodor Rogler Foundation “Yehudi Menuhin – Live Music Now” and Villa Musica Rheinland-Pfalz [Rhineland-Palatinate].

In 2015, the young pianist debuted with a solo recital at the Konzerthaus Berlin concert hall. At the International Mozart Festival in Salzburg the same year, she rose to fame with the Austrian premiere of two piano concertos by Elliott Carter.

On her first CD (May 2016), Luisa Imorde will present the first recording of “Zirkustänze [Circus Dances]” by Jörg Widmann, a colourful, humorous and abysmal piano cycle. This is juxtaposed by Robert Schumann’s richly coloured “Papillons [Butterflies]”. With her unusual programming, by playing Widmann’s “Elf Humoresken [Eleven Humoresques]” in alternation with works by Robert Schumann, the young pianist manages to create a remarkably subtle dialogue between the romantic and the modern eras. Jörg Widmann himself described such courageous intertwining as “shocking, ingenious and unique”.

CD Release Concert: 10 May 2016 within the scope of a Schumann Forum-Talk at the Schumannhaus Bonn.

CD-Recordings of works by Schumann 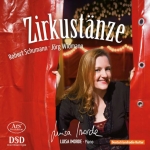